Tim Billo on the current status of the sword fern die-off: full video of the WNPS event

Tim gave a detailed and compelling report on the regional sword-fern die-off, and all of the research and findings from the last several years, sponsored by the Washington Native Plant Society.

The full video may be viewed here.
Posted by Paul Shannon at 11:31 AM No comments:

In February 2018, we planted 3 lines of nursery sword ferns, 12 plants per line,  hypothesizing that those planted into Ground Zero (GZN, GZS) would survive, but that those planted into (actually just ahead of) the active die-off zone (ADZ) zone would not do well.  All 36 plants have been watered through three summers.  The prediction continues to hold:

We surmise that the presumed pathogen no longer resides at Ground Zero - but could possibly return.  A continuous dense population of affected sword ferns may be needed for reinfection: the GZ sword ferns may be "socially distant" from current areas of active die-off. 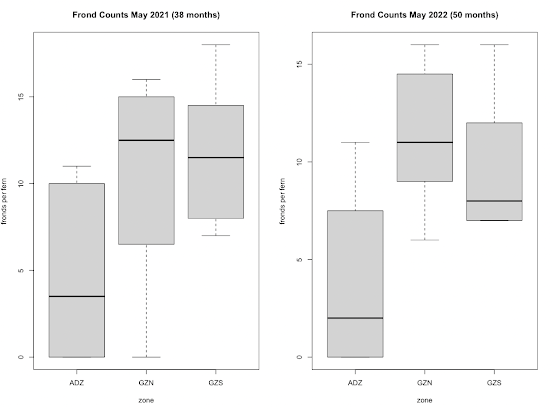 In February 2018, we planted 3 lines of nursery sword ferns, 12 plants per line,  hypothesizing that those planted into Ground Zero (GZN, GZS) would survive, but that those planted into (actually just ahead of) the active die-off zone (ADZ) zone would not do well.  All 36 plants have been watered through three summers.  The prediction continues to hold:

We surmise that the presumed pathogen no longer resides at Ground Zero - but could possibly return.  A continuous dense population of affected sword ferns may be needed for reinfection: the GZ sword ferns may be "socially distant" from current areas of active die-off. 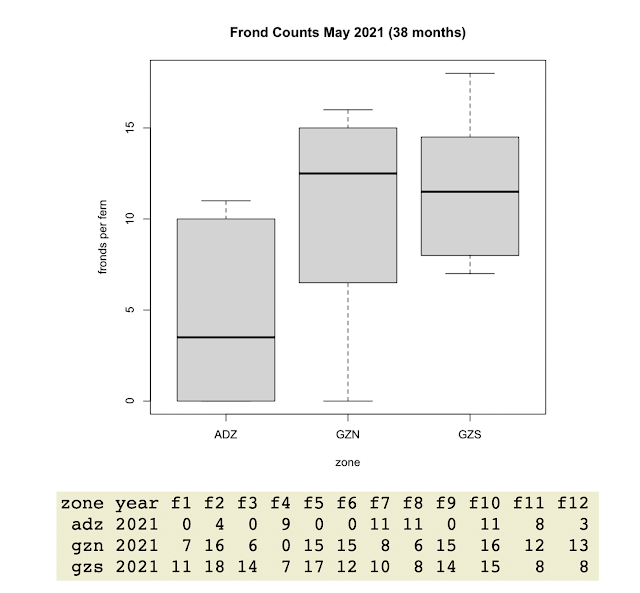 Die-off hits an old pure stand of ferns, one of the last unaffected

The “high ground” is about five acres in the forest at Seward Park,  bordered by the sqebeqsed and Windfall Trails. It occupies the highest elevation area in the forest. The southern quarter of the high ground is dominated by large sword ferns, with few other understory plants.
In January I found that about 3% of the ferns in these five acres were dead, all of them intermittently distributed, no regions of contiguous death.

Now, October 2nd 2020, contiguous die-off has appeared, showing the classic signs of the die-off.
The sword fern die-off can now be found throughout the entire 100 acres of the Magnificent Forest AND it spreads in concentrated, presumably more virulent form northward from the original ground zero.  Now, after six years of northward spread, this beautiful area - one of the last, large, old and intact sword fern communities at Seward - appears to have been hit.  There is no "social distancing" among these ferns.  A rapid (one or two year) demise is likely. It is always possible that this is a transient phenomenon, strictly limited to the small area pictured below - and thus not the first appearance of concentrated die-off.  Unlikely but possible.   Time will tell.
A 15 second video that captures this beautiful, now threatened area: 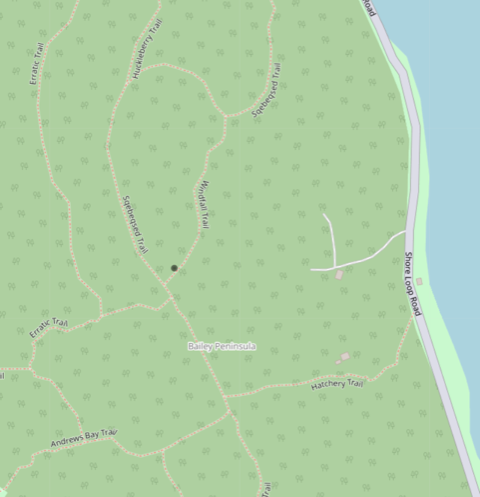 Is the die-off (principally) caused by drought or climate change?

When novel & dramatic events  happen at roughly the same time,  we humans tend to think they are causally related - that one event caused the other, or that they both had a shared cause.

For these reasons, we are often asked whether, and it is often suggested, that the PNW lowland sword fern die-off is caused by drought or climate change.

We suggest that the following multiple lines of evidence, in aggregate, conclusively establish that this is NOT the case.

The single strongest argument against the hypothesis that PNW drought causes sword fern mortality is this 2016 New Phytologist research paper by Jarmilla Pittermann and colleagues:

Not dead yet: the seasonal water relations of two perennial ferns during California's exceptional drought

Peer reviewed, published in a high impact journal, this paper presents lab and field evidence that sword ferns routinely survive extended severe drought.  If these findings hold up, and if they are as applicable to PNW forests as to California redwood forests, then drought (alone) cannot explain the sword fern die-off.

The first reports in the region of dramatic die-off are from 2010.  UW PhD atmospheric scientist Joe Zagrodnik looked for drought/die-off correlations and reported:

The period from 2007-2012 was generally characterized by near-normal temperatures and precipitation (2011 was a cool year). By all measures the current period anomalous weather started in 2013 and I can say confidently that anything happening prior to 2013 is not caused by unusually warm or dry weather patterns.

the ecophysiology analysis of ferns from healthy, intermediate and die-off areas in Seward park [show] that moisture stress is not a driver of physiological stress for Seward ferns.

For the ecophysiology analysis portion, our hypothesis was that plants in non-die off areas would have higher values for stomatal conductance, Fv/Fm, and possess a ​Ψ​ closer to the optimum for the species in question (or further from the turgor loss point for the local population) in comparison to plants in active die off areas. Three distinct areas of decline were established at Seward Park, die off, intermediate, and healthy. These areas were characterized with the help of Paul Shannon (Seward Park Steward) and Olga Kildisheva (Verdant Counseling, LLC) and sampled on August 19th, at the peak of the dry season. We used the following metrics to compare physiological stress of ferns in the die off, intermediate, and healthy treatment areas: dark-adapted fluorescence (Fv/Fm) to determine the efficiency of photosystem II, stomatal conductance (Gs) to ascertain whether or not ferns are closing their stomata during photosynthetically active periods, and xylem water potential (​Ψ)​ to determine water status (Toivonen and Vidaver, 1988; Schreiber and Bilger, 1987; Corcuera and Notivol, 2015; Angelopoulos et al., 1996; Jordan and Ritchie, 1971). Healthy tissue from ten ferns within each treatment group was analyzed for predawn and midday water potential and dark-adapted fluorescence. Stomatal conductance measurements were taken in between predawn and midday sampling. We found no significant differences between treatment groups in any of the metrics except midday water potential. The ferns from the die off treatment area had an average midday xylem water potential of -1.7574 MPa, versus -0.9074 MPa and -0.9474 MPa for the intermediate and healthy treatment groups respectively. This result is complicated by the fact that we ran out of compressed nitrogen during the midday water potential readings from the die off treatment area. Samples were immediately transported from Seward Park to Reed college in a cooler so that water potential measurements could still be taken. Due to the unstandardized approach in xylem water potential analysis between the die off and the other treatment groups, we cannot be confident of the accuracy of this result. However, a pressure-volume curve was created from samples taken across the three treatment groups, which gave us a turgor loss point of -2.3 MPa for ​P. munitum​ at Seward Park. Since the significant water potential result was well above this moisture stress-indicating threshold, we are confident in our conclusion that moisture stress is not driving the die off at Seward Park. This increases our confidence that the regional decline is caused by some still unknown biotic vector.

Dylan Mendenhall conducted transmission experiments at the UW greenhouse in the Fall of 2019, establishing that die-off like symptoms are reproducibly transmitted from affected fronds to unaffected fronds via shared sterile water.  Full details here (todo).

We received in 2017 reports, photos and videos of die-off on Artillery Hill at Fort Warden, outside of Port Townsend, average rainfall about 25 inches.    By 2019, all ferns had recovered.  This, we suggest, is the normal response and recovery of sword ferns to drought stress.   As an ancient and widespread PNW understory plant, it seems likely that it has well-established mechanisms with which to survive drought.

We are half-way through a five-year restoration planting experiment at Seward Park, described here.  36 ferns, in three groups, all ferns watered through drought months, show statistically significant survival - correlated with location - in an active die-off zone (low survival), and in area hypothesized to be free of any die-off activity (> 95% survival).

At Seward Park, and in the other regional die-off sites we monitor (ranging from near Quilcene on the Olympic Peninsula, to the Goldmeyer Hot Springs Road  in the foothills of the Cascades) no other understory plants exhibit the die-off or decline symptoms we see in sword ferns.  The die-off thus appears to be specific to P. munitum:  no other fern species are affected, no other shrub or herbaceous species.  It seems unlikely that the sword fern - famously robust and very long-lived ("1000 years is not out of the question" - David Barrington, University of Vermont, Polystichum genus expert)  - that the sword fern alone would be affected by drought and temperature.

The die-off at Seward Park spreads in two ways:  radially from heavily affected areas, and by leaps into distant previously unaffected areas.  The radial spread includes movement uphill, jumping across trails after some delay, and downhill into presumably wetter soil.  Large regions of low- and high-density fern populations are unaffected - within a short distance of affected areas.  This distribution is hard to explain by drought effects.    Pathogenicity, perhaps abetted by weather and climate,  makes much more sense.

Posted by Paul Shannon at 10:57 AM No comments:

Posted by Paul Shannon at 4:42 PM No comments:

Two years ago, with some guidance from Verdant LLC, and generous support from Seattle Parks, Suzanne Bouchard and I planted young nursery sword ferns at and near Ground Zero in Seward Park.  This is an ongoing experiment, to last at least three more years.  You can read an earlier report here.

The die-off at Ground Zero had reached steady state by 2014, leaving almost entirely bare ground.   10% of the original ferns, as we assessed in a June 2019 study.  This quarter acre was subject to erosion and likely undergoing further ecological degradation:  underground mycorrhizal networks need photosynthesizing plants, of which there were very few.   No natural restoration had taken place until a few fringecups - most happily - appeared in 2019.

Suzanne and  planted three lines of 12 ferns, two lines at Ground Zero, 1 line just north of what was then the boundary of the expanding die-off region.   I hypothesized that the agent of the die-off, whatever it turns out to be, was no longer active at Ground Zero, but that it was likely to be active and virulent at the die-off's leading edge.

This hypothesis was a generalization from a single fern planted at Ground Zero in 2014.  Inspecting the die-off with Seattle Parks plant ecologist Jillian Weed, I asked, "What should we do?".   "Monitor closely", she said, "and why don't you plant a couple of nursery ferns?".  We did, I watered the pair through a couple of summers, and one (dubbed "Jillian Weed #1") is thriving now six years later.   A 50% survival rate for restoration planting is better than I usually achieve.  So I surmised that the die-off agent/s were gone - at least temporarily.

I water all 36 plants weekly during summer drought, two liters per palnt.  The Ground Zero ferns (with one exception) are thriving.  The northern line ("ADZ" for active die-off zone) is about 50% dead or dying.   I have made every attempt to treat all three lines identically.

In April, Bonnie Drew, Jeff Kelley and I twice independently surveyed all three lines.  We counted fiddleheads, interpreting them as simple markers of overall plant health.   Here are the results, summarized for each of the three 12-fern lines, in box plot form.   The full dataset is available on request.

I provisionally conclude that there is currently no active agent affecting ferns at Ground Zero.  The degraded site is now recovering, which is very fine to see.   The agent may return. 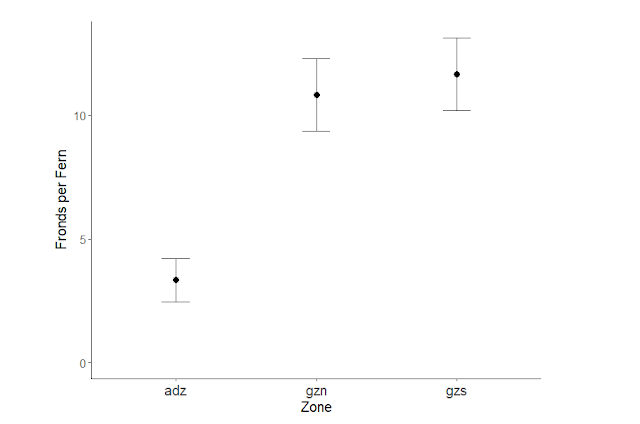 (Seattle Parks contracted out some additional restoration planting at Ground Zero, installing more than 100 plants of mixed native species in the winter of 2018-2019.  I water these plants in the summer as well, and part of the returning health of Ground Zero comes from this generous action by Seattle Parks.)